A son of leading sire Snitzel, Bondi has all of the attributes required to make a successful sire.  No compromise has been made.  This colt is the real deal!

Bred by John Singleton’s Strawberry Hill Stud, he sold for $400,000 as a MM Gold Coast yearling and was purchased by Newgate, China Horse Club and Winstar Farm.  His racing career, not surprisingly, started with a bang.

Bondi debuted with a startling performance in the LR Breeders Plate. Coming off one lifetime trial, he ran the seriously fast time of 56:95 when 0.8 lengths second to Performer in a race record time.

Already, Bondi was a colt to watch.  His time not only showed he possessed real speed, but he displayed that speed early,  at only two years and twenty days from birth.

The Breeders Plate is a test of precocity as much as speed and his performance merely scratched the surface of this colts ability.

As a 2yo, Bondi raced a further 6 times showcasing his natural talent when finishing  0.7 lengths 3rd in the G3 Black Opal to Encryption, a horse that went onto win the G2 Danehill Stakes (1200m) and finish less than a length 2nd in the G1 Oakleigh Plate (1100m).

Highly respected trainer Peter Snowden declared Bondi a “good thing beaten” in the Opal and lamented his misfortune in running which cost Bondi a start in the Golden Slipper.

In his penultimate start at 2, he raced in the G1 Champagne Stakes (1600m).  No “one-trick pony”, Bondi showed his class to finish 2nd to Seabrook in a very highly rated edition of the race.  Bondi running the mile in 1:34:55

In his 3yo season Bondi franked his juvenile performances with a game 2nd in the  GC Magic Millions Guineas (1400m), only beaten 0.1 lengths by Boomsara while stopping the clock at 1:21:15

At his final start in the G2 Hobartville Stakes, he finished 2.2 lengths 3rd to The Autumn Sun.  He sustained a tendon injury in running and was subsequently retired.

In only 12 starts, Bondi proved  he was a colt of the highest quality.  His speed was genuinely top-class from 1000m to 1600m, and he demonstrated  his precocity racing 7 times as a  2yo and trained on at three to compete with the best and repeatedly clocking times that only high quality horses can produce. 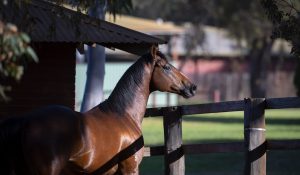 His pedigree is without fault.  He is by the all conquering sire Snitzel and will retire to stud the same year as Trapeze Artist and one year after another high class colt, Russian Revolution.  Snitzel is only beginning his journey as a sire of sires.  His success in this sphere is virtually guaranteed, with more high class colts undoubtably to follow.

Bondi’s dam, Bondi Blonde is by the immensely successful sire in Red Ransom.  Red Ransom has proven to be a very reliable broodmare sire and his daughters have already produced 125 stakes winners worldwide.